Weird Sisters Films
Films that cast a spell on you...

Take a peek at our work.

This is where you can learn more about us.

What we are doing next.

Have a look at our brilliant portfolio.

We've got deep roots in theatre.

Let's get in touch.

Originated in 1997 as a theatre company devoted to producing new works by women, our theatrical endeavors utilized a cinematic style that warranted a natural progression into film. As filmmakers, it is our aim to promote women artists, present thought-provoking ideas and break down barriers while interpreting the magic and mystery of the human condition.

Zealey Bess, is an award-winning filmmaker and theatre director with a résumé that features work with the legendary Sidney Lumet, John Leguizamo, Kevin Smith, Matt LeBlanc, Frank Whaley, Bruce Beresford and many others. Her work has crossed boundaries and platforms for many years as an independent director and producer in film and theatre.

She has been directing theatre and film, specializing in new work since she arrived on these shores and established her company, Weird Sisters, as a theatrical entity in 1997. Under the auspices of her company she has developed numerous projects in collaboration with many writers both established and newly emerging on the New York scene. She subsequently directed and produced her debut film, the award-winning baseball trilogy: Play Ball! (Fanfare for A Common Man, Random Acts of Intimacy, Caught in Time) that screened throughout the globe including the Berlin Film Festival, Cannes Director Fortnight, and at over 40 USA festivals including New York, Newport, Seattle and Savannah. In addition to garnering Best Film at seven USA festivals, she was awarded 1st Prize for Best Short Film by woman director at the LA Women In Film Competition.

As a long-standing member of the Ensemble Studio Theatre based in New York, one of the leading developmental theatres of new plays in the USA, she has directed and produced numerous new works. NY Theatres where she has worked include The Foundry Theatre, Ohio Theatre, Soho Repertory Theatre, Abingdon Theatre, Cherry Lane Theatre, Playwrights Horizons, Here, Cort Theatre Broadway, and internationally the Edinburgh Festival, the Young Vic, the Strand Theatre, London. She directed the award-winning NY Fringe Winner The Radicalization of Rolfe by Andy Burgh at the Players Theatre and the Soho Playhouse 2016, and most recently Paper Doll by Susan Eve Haar which was very well received at the Edinburgh Fringe 2017.

She is a member of Ensemble Studio Theatre, Cinefemme, SDC, Actors Studio PDU, NYWIFT, LPTW and Board Member of Dell Arte Opera. She is on the Faculty for the Graduate Film Program at Tisch School of the Arts, New York University, New York Conservatory of Dramatic Art and is represented by Linda Weaver at Access Talent.

Sara Brett Patterson has been an integral part of Weird Sisters since 2002, bringing her business and management expertise to the company. Prior to coming on board, Sara was a founding member of Daisy Jayne Productions, which produced Cock & Bull Story at the Greenwich Street Theatre. Weird Sisters film producing credits include ‘Play Ball!’ ‘Reverse Psycho,’ and ‘The Launch.’ Ms. Patterson has also developed several projects under the Weird Sisters banner. Among them: “Atom + Eve: A Rock Opera” and “7 Variations on the Same Lover” (also transferring from stage to screen). Sara received her undergraduate degree from the University of Michigan and her MBA from Baruch College. Her corporate work experience includes Director of Recruitment for SIRIUS Satellite Radio in New York and Director of Talent Acquisition at Coach. Currently she serves as the Vice President of Operations at Gilt City, a member of the Gilt Groupe. In addition to her work in film and entertainment, she is the co-owner of LOBO Restaurant, which has two locations in Brooklyn, New York.

JP Sarni serves as Vice President for development at the Los Angeles-based film and television company, aid+abet. He has worked in the entertainment industry for the past ten years as a producer of film, television, theatre and satellite radio. In 2007, he moved to Los Angeles and began working in development at HBO Films before moving on to aid+abet where he oversees development and is a producer on several projects, including the miniseries, SUCCESSION (in development at USA Network.) He is a partner in the production entity Métropole Ink which runs the entertainment blog, JoyHog.com. He holds a BFA in Media and Performing Arts from Savannah College of Art and Design.

An actor and voice-over artist, Carol Jacobanis has lived, worked and studied in New York, London, and Los Angeles. Her NYC theater credits include “Flashback” and “Criminal Conversation,” both directed by Abigail Zealey Bess at Ensemble Studio Theatre; “Tamburlaine” with Target Margin Theater; the FringeNYC award winner “Surface: the Absurdist Biography of Uncle Phil;” “As You Like It,” “Midsummer Night’s Dream” and “King Lear” with Shakespeare NYC; and the lead in the rarely performed Horton Foote play “Getting Frankie Married: and Afterwards” with Horton by the Stream. Her film and television credits include “Law & Order SVU,” the title role in the short drama “Judith,” and 2008 candidate for president Hannah Jefferson in the mocumentary/art film “Europe for President” for ARTE France TV. She also has roles in the Weird Sisters films “Random Acts of Intimacy” and “The Launch.” As lead singer with the late 1990s pop/rock band Primrose Hill, Carol was a regular performer at the notorious Loser’s Lounge and worked with members of Blondie, Television, the Patti Smith Group and The Bongos, to name a few. She can be heard in the animated feature “The Boy Who Wanted to Be a Bear,” television cartoons from “Pokemon” to “Winx! Club” to “Magical Do Re Mi,” and in a wide range of ads and video games.

A Silent Film About Finding Your Voice Produced by Staatsfactory and Weird Sisters

Short-form screenplay by Amy Staats. An ode to the silent film era and the screen goddess that belonged to that time.

Here’s What I Like, RUSSIAN LIT! And Now I’ll Tell You Why 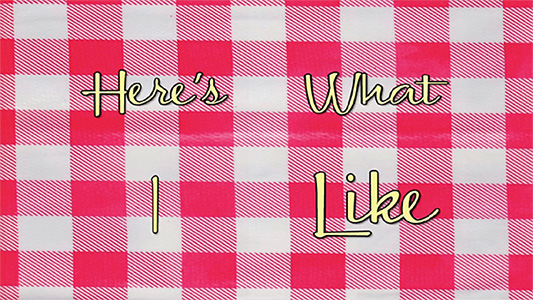 Here’s What I Like, Fashion and Flowers! And Now I’ll Tell You Why

Here’s what I like, Fruit! And Now I’ll Tell You Why

A Trilogy of Baseball Films 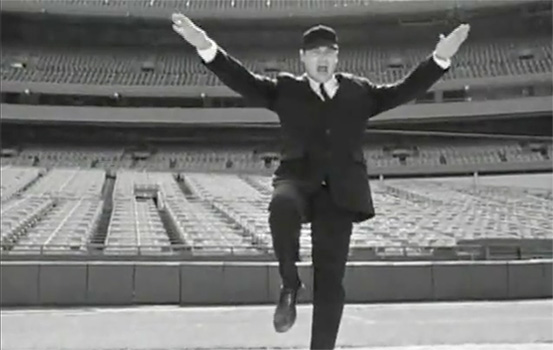 Play Ball!, a trilogy of short films paying tribute to baseball, honors the people whose passion and participation support the game — the groundskeeper, the fans, and the umpire. These black and white musically driven narratives evoke the silent movie era, which in turn creates the atmospheric magic of a day at the ballpark. The films were shot on location at Shea Stadium, New York.

WATCH: Fanfare for a Common Man 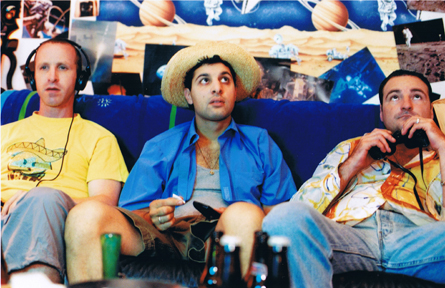 Weird Sisters went into partnership with Jason Howard for production of his short narrative project, “The Launch,” which was shot in Manhattan and Brooklyn.This short, penned by Howard, follows three friends on a magical and psychadelic adventure after they become trapped on a city rooftop watching the launch of a space shuttle. Helmed by Zealey Bess, the cast stars Howard, Denny Bess, Edwin Sean Patterson and Johnny Giacalone. 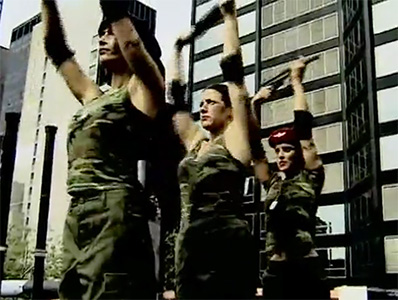 The dynamic indie-punk band, Sherry and their single, “Reverse Psycho.” Is featured in this music video. This New York band consists of songwriter and lead vocalist, Sherry Vail, Mike Van Steyn and Walter Atkinson. The project was a co-production between Weird Sisters and Fashionista Music.

Based on EATING a short story by Rick Bass 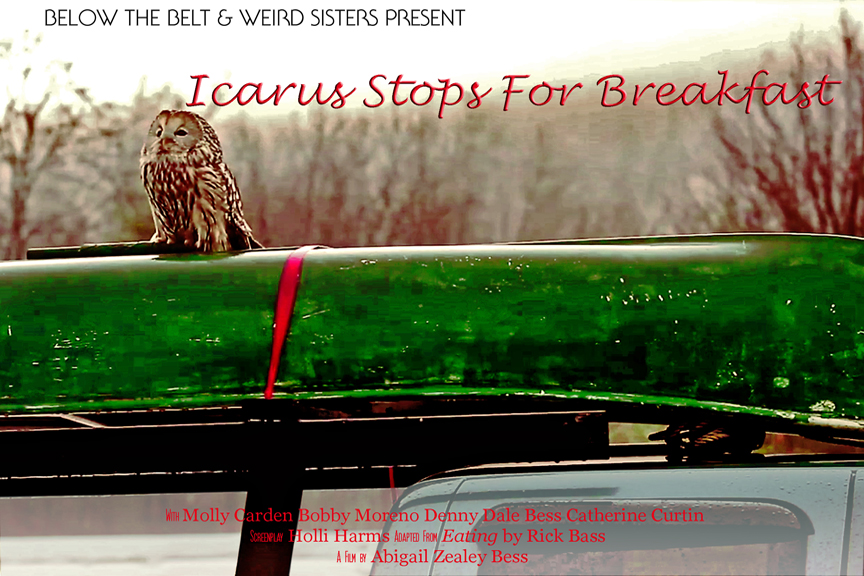 Icarus Stops for Breakfast is a magical story of love and the relationships that exist between humans and the landscape in which they live, based on the story Eating by Rick Bass.
Coming Spring 2019.

Produced by Warren Etheridge, Below The Belt & Weird Sisters Films

Here are some production stills and videos for you to watch. 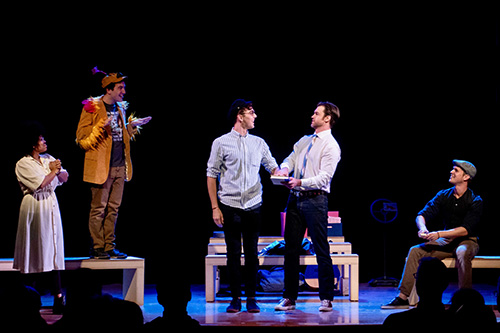 Weird Sisters is proud of its theatrical roots in New York. Over the years, we have cultivated relationships with actors, directors, writers, designers and artists whose body of work transcends narrative mediums – from stage to screen to song to print and back again. We encourage you to follow the works of our collaborators and associates. 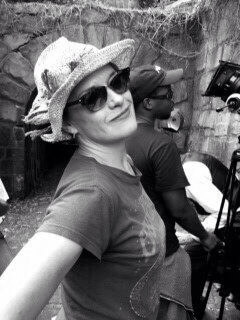